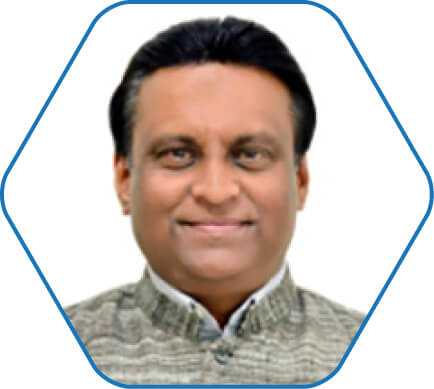 A 1991 batch IAS officer belonging to the Telangana Cadre, G. Asok Kumar, had earlier served at the Centre as Joint Secretary in the Ministry of Civil Aviation where he set-up the Aircraft Accidents Investigation Bureau and played a keyrole in reviving the then ailing airline industry. A winner of Telangana Excellence Award in 2018 and Jalmitra Award in 2002, he has initiated/completed many infrastructure projects like the Outer Ring Road, Krishna Phase-2 Drinking Water Pipeline, Godavari Drinking Water Pipeline Project, etc. in Hyderabad. As Principal Secretary BC Welfare Deptt., he was instrumental in starting 119 English Medium Residential Schools in all the Assembly segments on 12th June 2017. He has also worked in the sectors of Medical and health, Information Technology, Tribal welfare and sports.

Asok Kumar G has made significant and diverse contribution to the Water and Sanitation Sector. Presently he is the Mission Director, National Water Mission (NWM) and till recently held additional charge of the post of Executive Director (Projects) in the National Mission to Clean Ganga (NMCG) also.

As Mission Director, NWM he initiated a series of lectures titled “Water Talks” which is held in the third Friday of every month, starting from the World Water day, March 22, 2019. In these “Water Talks” eminent personalities/ activists from the theoretical and practical field of water conservation, water management and water technology share their insights and experiences. Under his the National Water Mission Awards were presented for the first time on 25th September, 2019. The awards, in 10 categories, carry total prize money of Rs 45 lakhs. As ED (Projects), NMCG, he was in charge of the implementation of project works estimated over Rs 20,000 Crores related to the cleaning of Ganga river in its 11 basin states. Perhaps the most significant achievement of this winner of “Jal Mitra” award from the Government of Andhra Pradesh (under Sri Nara Chandrababu Naidu) and the first TEX (Telangana Excellence) Award by the Government of Telangana (under Sri K.Chandrasekha r Rao) for Outstanding work done in Public Administration, is the successful completion of over 1.20 lakh Individual Sanitary Latrines (ISLs) in Nizamabad District in the year 2002. Conceived, planned and executed under the leadership of Sri Asok Kumar, who was then the District Magistrate and Collector of Nizamabad district, (in erstwhile Andhra Pradesh State), presently in Telangana, this locally conceived project, aptly named “Shubrata” was originally intended to complete One lakh pucca Individual Sanitary Latrines (ISLs) in the houses belonging to the people living Below Poverty Line in SIX months (June- December, 2 2002). With the massive participation of the people, not only the target was successfully achieved, but it went on to complete another 20,000 more ISLs. (This was even before the advent of the Atal Nirmal gram Yojana and the Swatch Bharat Mission.) “Shubrata” was a perfect example of convergence of funding from schemes like the Total Sanitation Campaign and Food for work program of the Government of India, the contributory funding of the total sanitation program by the Government of Andhra Pradesh; the funds from the local bodies and local contribution in addition to the beneficiaries contribution- either in cash or kind and implemented with overwhelming public participation. The foundation of the “Shubrata” program was another local initiative which built toilets in 1000 government schools, particularly for the girls in the year 2001- 2002 with UNICEF assistance. Girls from these schools acted as the main motivators and drivers of the massive construction of pucca latrines (and many cases with expanded area to include a space for bathing) in their house hold, encouraging their mothers to demand these ISLs at home. Earlier habitation wise drinking water committees were also formed in all 1168 habitations. The combined effect of these initiatives resulted in a drastic decrease in diarrhoea cases in the following year.

As Managing Director of Hyderabad Metropolitan Water Supply and Sewerage Board (HMWSSB), he (a) started the Daily Water Supply in the core city of Hyderabad after a gap of 24 years on14/11/2008; (b) completed the 339MLD Sewerage Treatment Plant (STP) at Ambarpet; 172 MLD STP at Nagole and 30 MLD STP at Nallacheruvu and started the work on 30 MLD STP at Attapur; (c) completed Krishna Water Phase II project to bring 90 MGD water to Hyderabad from Krishna River (inaugurated on 19/7/08); (d) Constructed a corporate office building for the Board (All these projects were inaugurated by Dr YS Rajasekhara Reddy, CM of Andhra Pradesh); (e) constructed 14 new water reservoirs in Hyderabad under JnNURM (f) prepared project report, obtained government approval (on 1/10/08) and started the work on Rs 3375 Cr, 120 MGD Godavari Water Supply Scheme to bring water from Godavari river, 186 kms away to the city to meet futuristic needs of Hyderabad (g) Set up the Hyderabad Water and Sewerage Museum (h) Commissioned the Rs 10 Cr SCADA system 3 for monitoring reservoir water level and its chlorine content (i) introduced GPS monitoring of water tanker movements in the city. For these efforts the HMWSSB was awarded the National Urban Water Award by the Ministry of Urban Affairs, GoI in 2009.

As Vice Chairman, HUDA ( Hyderabad Urban Development Authority ) Asok Kumar initiated restoration and renovation of many other lakes in Hyderabad city. Completed the STPs and parks at Safilguda lake and Langar Houz. Organized massive tree-plantation drives in the city, the biggest one being the one day-two lakh tree plantation drive on 26/7/04.

As Project Officer, Integrated Tribal Development Agencies (ITDAs) of Bhadrachalam and Utnoor, he implemented the IFAD funded Andhra Pradesh Participatory Tribal Development Program (APPTDP) in the scheduled remote and interior tribal villages of Adilabad and Khammam districts. In Adilabad district, under APPTDP, he introduced soyabean cultivation (in 1995), which led to diversion of large area under cultivation of cost-intensive-cotton crop to Soyabean crop in a short period. The area under Soyabean cultivation in Adilabad has increased more than 100 times now from the humble beginnings in 1995. Under APPTDP, in Bhadrachalam, 132 micro irrigation tanks, each with ayacut between 20-100 acres, were constructed with active participation of tribal population. 94 new lift irrigation schemes to lift water from Godavari river and 67 borewells to irrigate lands of tribal farmers were developed.

As Collector of Nizamabad, he started the cleaning of Phulong river and removal of encroachments from its banks in 2002. Rejuvenated and restored a lake in Nizamabad.

As a token of their appreciation, this lake near Janakampet is now named as “Asok Sagar” and is a local tourist attraction. This lake has a 18ft statue of Goddess Saraswati installed in the middle of the lake and a restaurant on its banks.